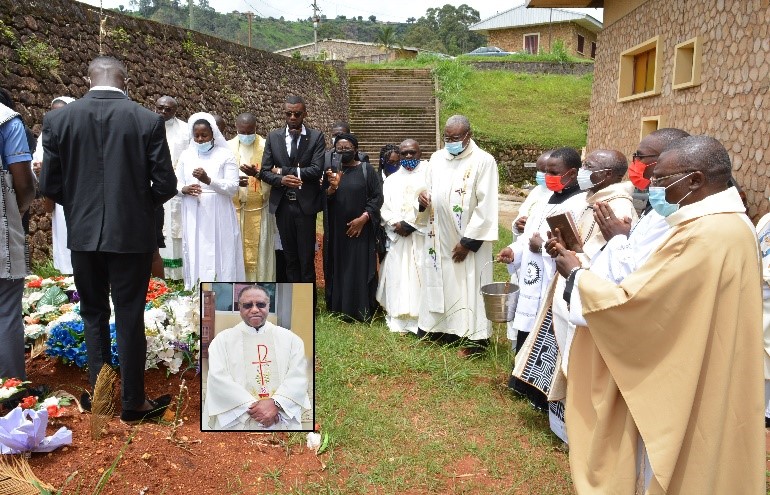 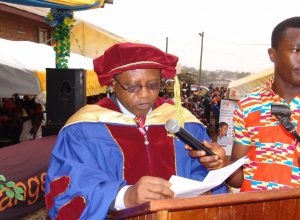 This took place on Ascension Thursday, May 13, 2021 at St. Joseph’s Metropolitan Cathedral, Big Mankon, Bamenda. The ceremony began with Holy Mass presided by Mgr. Lafon’s bosom friend, Mgr. William Neba and many concelebrating priests, including the priests of CATUC and Superiors and priests from the various congregations which have students in CATUC. The eloquent preacher of the day, named Fr. Eugen Nkardzedze, successfully sustained the attention of his audience with a moving sermon, where he highlighted some outstanding qualities of the deceased cleric. Mgr. Patrick Lafon was a man who steadfastly stood for the truth and for the common good. He was a quiet, soft-spoken but resolute character who enjoyed himself fully and his loud laughter during moments of relaxation was distinct.  During this Mass, there was a bread and wine procession by Rev. Sisters who are students of CATUC. The choir, which was composed of student seminarians and Rev. Sisters together with the CATUC Wisdom Singers, animated the Eucharistic celebration beautifully. Fr. William Neba was so grateful to the entire CATUC community for organizing this celebration in memory of his bosom friend and brother priest. 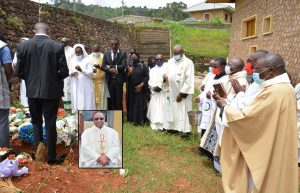 After Holy Mass the whole congregation processed in song to Mgr. Lafon’s grave by the Cathedral. This was followed by prayers, singing and lighting of candles by representatives of all the schools and faculties. Then the congregation moved to the Cathedral Parish Hall for part two of the celebration. Here, activities began shortly after the installation of mourners with an opening prayer led by the Director of Teaching, Fr. Peter Takov. This was closely followed by the rendition of the CATUC Anthem by CATUC Wisdom Singers. After this, CATUC’s Vice Chancellor, Fr. Joseph Awoh Jum, in his brief opening speech, welcomed everyone present. He expressed his gratitude to the planning committee, the choir, to the guests, priests and especially the Superiors of the different religious houses who were present for the occasion. He underscored that Mgr. Lafon was one of the formators that he greatly admired as a seminarian and equally enjoyed working with him in CATUC as a colleague for he did his work diligently. The VC saw eye to eye with the Fr. Eugen on the qualities accorded to the deceased and added that Mgr. Lafon was culturally inclined, a Nso man to the core, who enjoyed eating his traditional fufu corn and vegetables accompanied by a glass of wine. He humorously recalled that Mgr. loved socializing and was always the head of the “Liquidation Committee”. Now that he was gone, he wondered what will become of that committee.

The VC’s speech was trailed by a presentation on the Life and Philosophy of Mgr. Patrick Lafon (PhD). The young presenter, Mr. Frankline Berinyuy is an Assistant Lecturer in the Philosophy Department of CATUC. He held his audience spell bound in a fascinating energetic lecture centered on the biography of Mgr. Patrick Lafon and particularly on the theme of death. He briefly introduced the contents of his paper before delving into the crux of the matter.  The audience was informed that the deceased was born in 1952, was the first priest to be ordained in this Metropolitan Cathedral where his body lies now, served God as a priest for 43 years and 10 months, was an elite priest without being elitist following his background and exposure, and died at 67years 4 months old. He was a man of principles who seldom flattered anyone. 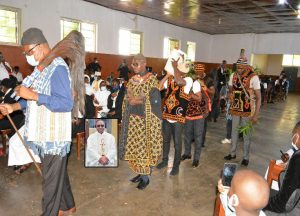 Mr. Berinyuy then moved on to present Patrick the Philosopher. He was chair of philosophy in CATUC, loved Metaphysics, hence everything that exist was true to him. He actually loved truth and was teacher of Metaphysics, History of Philosophy among others. The speaker spoke at length on the notion of death drawing inspiration from both Western and African philosophers such as Plato, Plotinus, Aristotle, Thomas Aquinas, Augustine, Nsamenang Bame, Oluwole and John Mbiti. He underlined the African notion  of death as “moving to” and someone who is physically dead is said to have” arrived there” as soon as he dies. So the African belief system recognizes life after death as moving to a better place. Death is not to be feared posit these philosophers for it is only a transition to a better life. He rounded off his talk with the presentation of Mgr. Lafon’s book titled “Virtue in Political Life”. The book comprises four chapters and is based on virtue, the concept of the common good, highlighting that politics, virtue and the law are inseparable. Hence, politics should go along with virtues and the law. There was a spontaneous thunderous unending applause after this brilliant presentation. 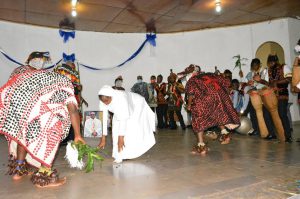 What is more is that the Philosophy students, mostly seminarians, had a cultural procession led by Fr. Peter Takov. All clad in the traditional North West regalia, they processed majestically to the stage carrying raffia palm wine and animal horns traditionally used as cups for drinking the wine in most grass field cultures. One of them recited a tribute to Late Mgr. Patrick Lafon in a typical traditional Nso style. He gave the meaning and significance of each of Mgr. Lafon’s names. They processed out of the stage in the same dignified manner, later on.  Mill Hill Seminarians thrilled the spectators with a traditional “juju” dance. It was so fascinating and entertaining that the onlookers could not resist dancing to the stage and expressing their gratitude in cash.

In his closing remarks, the VC had nothing but words of gratitude to the different stake holders who made the celebration a huge success, especially Fr. Richard Njoroge, the Superior of the Mill Hill Community that put in a lot materially. The former invited everyone present to lunch in memory of late Mgr. Lafon’s attitude of socializing, sharing and love for the common good.  Lunch was served after Fr. Ignatius Berily blessed the food.  Indeed, it was a memorable day in CATUC!