By Stephen A. Kube

The World Philosophy Day was instituted in 2002 by the United Nations Education, Scientific, and Cultural Organization (UNESCO) to honour philosophical reflections around the world. It is a day for people to share thoughts, openly explore and discuss new ideas and inspire public debate or discussions on society’s challenges. This year, on World Philosophy Day, we were all invited to reflect on the meaning of the current pandemic, underlining the need, more than ever before, to resort to philosophical reflection in order to face the multiple crises we are going through. 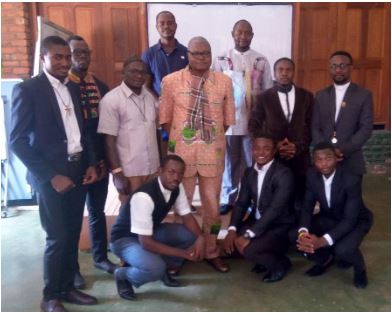 The Debate Team and the Jury with the Head of Department

In was in this regard that the Department of Philosophy (in the Faculty of Humanities and Social Sciences) gathered on Thursday 19 and Friday 20 November 2020, to celebrate World Philosophy Day in the Catholic University of Cameroon (CATUC). The department organized a debate and a philosophical discussion on the question and meaning of “Death” using as theme: Philosophy and Death.

The student Debaters(right) and the Jury (left)

On Thursday 19th November 2020, after morning lectures, the staff and students of the department were ushered into the Aula Magna at 01:00pm by some light musical animation. Also present at the event were the students and some staff of departments of Management, Accounting, Marketing, and Medicine.

The debate opened with opening prayers led by one of the students, Br. Yvisimbom Chrysanthus (Philosophy III). Fr. Siani Edward and Dr. Shang Nelson formed the jury for the debate which had as topic: COVID-19 is a happy fault –felix culpa. The debate lasted 48 minutes, and those for the motion were victorious. There was room for interventions from the audience and this equally gave the students present at the event an appreciation for the logical advancement of thoughts that were exchanged.

The next subject on the agenda of the day was a discussion led by Dr. Shang Nelson. The discussion was centred around the quotation: To live is to suffer and to die; to survive living and death is to find meaning in suffering and dying, but none teaches the other this meaning. This discussion helped present a multifaceted view on the questions surrounding death and its meaning. This took a turn toward the current pandemic and the many deaths which have resulted from it. There were discussions about the political, ethical and biological implications surrounding the pandemic and how the world post covid-19 will look like. The discussion tended towards the thoughts that life after the pandemic will be one filled with hope rather than despair – for a world devoid of hopeful persons is one tending towards doom. Thus, the work of the philosophers is achieved in raising the intellect towards various problems as a result of the pandemic. This discussion concluded Day One.

Mr Laiven Kizito on Peter Singer and the Ethical Revolution

On Friday 20 November 2020, the students and staff of the Department of Philosophy gathered at the Aula Magna again for another presentation. This discussion was led by Mr. Laiven Kizito Mbuwir and captioned: Peter Singer and the Ethical Revolution. The presentation which lasted about 20 minutes was a clarion call to rethink “life and death” as challenged by Peter Singer in his work Rethinking Life and Death.  The philosophical exposé shed light on the subject of new technologies and the need to give preference not only to humans but also to all life forms and species as supported by Singer and others like Hans Jonas and Joseph Ratzinger. This inevitably led to a discussion on the “Prolife” question – do we protect only humans or the all the living species on earth? Should we discriminate between the various species? The African Approach to ethics and how it has always been closer to nature, and lastly, the meaning of things – the problem of man being the centre and measure of all things.

The discussions for this day came to an end at about 2:30pm with the final remarks of the Head of Department, Fr. Peter Takov, and a prayer and benediction from Fr Donatus (one of the students).

First Recollection of the Year – A Spiritual Feast for CATUC!