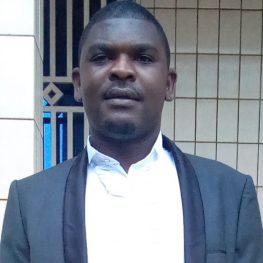 Banking And Finance Faculty of Business and Management sciences

Tamafor Elvis Ndohnwi was born on the 24th of June 1986, attended primary school at P.S Akou Bambili from 1990-1997 and later had college secondary education in G.B.H.S Mbengwi from 1997-2002 and continued to high school in the same institution from 2002-2005. He then moved to the University of Buea where he had his BSc. In Banking and Finance from 2005-2008. In February 2009, he got a job with the Bambili Cooperative Credit Union Limited and his first post of duty after completing his probationary period of three (03) months was in Yaounde where he worked as a Teller from 2009-2011 and was later transferred to the Head Office of BamCCUL to serve in the capacity of Network Accountant, which he served for 3 months and was promoted to the Branch Manager of the Head Office of BamCCUL . At this time, he served in a dual capacity as Network Accountant and Branch Manager from 2012 to 2014 when he resigned to delve into the academic world after completing his MBA in Banking, Tax Administration and Financial Services within the period 2012-2014. Tamafor Elvis has been a part-time assistant lecturer in the Department of Banking and Finance at the Catholic University of Cameroon (CATUC) Bamenda from October 2014 to October 2015 and a full-time assistant lecturer in the same department from October 2015 till date. He also takes part-time courses with the HND and MBA programs under the FBMS of CATUC-Bamenda. He has also been a part-time assistant lecturer in the Higher Institute of Commerce and Management (HICM) at the University of Bamenda from 2014 till date. Due to his passion for his profession as a banker/accountant, he has always merged teaching with corporate world activities such as being the Chief of Operations at TOPROC FINANCE PLC from 2015-2017 and currently the Head of Internal Controls at DESTINY PRINTS, Bamenda.

Oct. 2014 – Present: Part Time Assistant Lecturer in the Dept. of Accounting/Finance – Higher Institute of Commerce and Management, University of Bamenda.

-Social Media as Assistive Tools to Teaching and Learning in Crisis Situation within Higher Education. Case of the The University of Bamenda in the Midst of the Anglophone Crisis since 2016