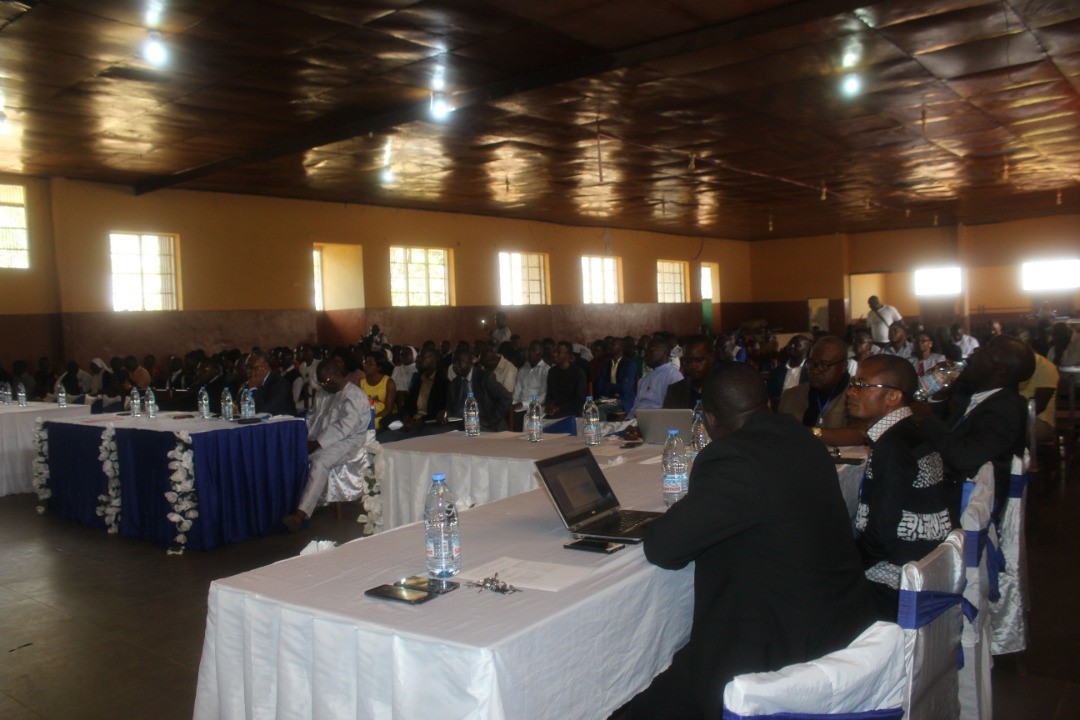 Following on the last Symposium on Pope Francis’ Laudato Si’, the Catholic University of Cameroon (CATUC) Bamenda organised a Symposium on African Identity: Confronting Conflicting Interpretations. This took place on the 19th of January 2020 in the Mankon Cathedral Hall and brought together students and academics (especially from CATUC and the University of Bamenda), members of civil society, representatives of NGOs and Health institutions, and representatives of the Universities of Buea and Bamenda, which are also mentors to the Catholic University of Cameroon.

The desire to investigate the African identity problem from multi-disciplinary perspectives arose not only from the fact that, generally speaking, African nations have been underperforming on the world stage in the areas of economics and politics, development and technology but also from the fact that many African youth believe that to ‘succeed’ in life they have to abandon Africa for Europe, America or Asia. Why are Africans abandoning their motherland, their culture and their values for other continents and adopting other values and cultures?

The Vice Chancellor’s welcome speech set the stage for the discussion, beginning from the Book of Genesis (9:20-27) where Ham finds Noah drunk and naked in Noah’s tent. He tells his brothers, Shem and Japheth, who proceed to cover their father without gazing at him. When Noah finds out what happened, he curses Ham’s son Canaan, saying he shall be ”a servant of servants.” In the biblical account, Noah and his family are not described in racial terms, but over time, in the interpretations of Islamic, Christian and Jewish scholars, Ham came to be widely portrayed as black, and blackness, servitude and the idea of racial hierarchy became inextricably linked. By the 19th century, the belief that African-Americans were descendants of Ham was a primary justification for slavery among some American Christians.

The concept of the African as racially inferior persists to this day and often shows its ugly head in sports and other domains and many Africans still think that Africans are a cursed race. While racism and racial hierarchy is very contentious, the underperformance of African nations in a wide array of domains, including politics, the economy and technology, and overall development and welfare of her people has reinforced the belief in some Africans that even if we are not cursed, we must be significantly different from other races which outperform us widely on these benchmarks.

As Africans we have reacted to this belief in various ways, including trying to look like or speak like Americans and Europeans, abandoning our countries and continent and taking huge risks across the Sahara desert or the Mediterranean Sea to seek refuge in other continents, even if this means dying in the process or going to work as slaves in Europe, America, the Middle East and other locations around the globe.

Presenters at the Symposium tackled the issues from genetic, anthropological, historical and the African philosophical perspectives. While the African Philosophers grappled with the definition of identity and the question of who an African is, the geneticists broached the question as to whether the African is genetically engineered to be different from people of other races and maybe hierarchically inferior to them. It was clear that gene patterns are so diverse around the world that from genetics alone, it is difficult to conclude that the African has a unique identity. People from various parts of Africa share gene patterns with people from other parts of the world. The Anthropologists made it clear that the African has a unique identity from his ethnicity and culture, even if this identity might be receding as globalisation adulterates that culture. The historians concluded that we have an identity which is shaped by our history and colonial past, which might have enhanced the belief that Africans are racially inferior to other races.

Even though this was an academic exercise, participants were emotionally involved in the debate, as people living under the weight of this ‘racial profiling’. At the end of the day, the take away message of the symposium was that since Africans are not genetically unique and have the same abilities like people everywhere else in the world, we should focus on our abilities rather than look at our past and blame the slave trade, colonialism or even religion for our fate. While we need to work hard to preserve our cultural and social values, we also need to recognise our abilities and work hard to move ourselves, our country and our continent forward after so many centuries of being the begging bowl of the world. The question should no longer be: how did we find ourselves in this situation, but rather: how do we get ourselves out of this situation? We shall gain our self-esteem and the respect of others when we perform at a par with them or outperform them. And that is within our reach!